After much deliberation, we gave up our older cat, Pixel, today. 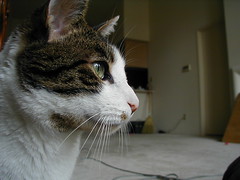 We’re not sure what happened to him in the last few years, but he got increasingly agitated and territorial. When he would see another cat outside, he would freak out and yowl loudly, scaring everyone else in the house. We would constantly find places in the house where he sprayed to mark his turf.

We brought him to the vet several times, trying pheremones, drugs and even aluminum foil to get him to stop marking. Nothing worked. We spent thousands of dollars on checkups and tests to make sure there was nothing else wrong with him. He’s ruined furniture. When we left California, our former landlord had to take more money off our deposit to clean the rugs a second time because the new tenants complained of the smell.

With a new house and toddler (soon) running around, we couldn’t let this go on. We considered giving him up in California, but our hope was that a change of scenery would also change his attitude. For a few weeks, it seemed to. Then we found a spot where he peed. Then another. Since then, both cats have been confined to the basement, where everything we care about is in plastic boxes. Hopefully there aren’t any more spots upstairs we haven’t discovered yet. It’s terrorizing when you don’t know when you’ll find the next marking.

Anne did a lot of work to find a shelter that wasn’t full and wouldn’t euthanize him. I hope someone will take him, though it can be hard to place a 10-year old cat. We couldn’t convince any of our friends or family to take him and we didn’t think letting him outside would help.

He was a smart cat, able to fetch his favorite toys when he wanted. He would come when called. He didn’t shed a lot and he didn’t claw the furniture. He knew how to communicate with us when he needed food, water or attention. He would wait at the end of our bed as I got in at night so he could lie on my chest for a while. If I didn’t give him enough attention, he’d paw at my face. 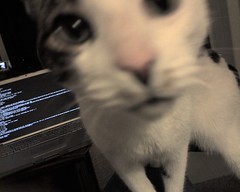 It was sad to have to give him up, but it didn’t seem like there was any other choice. He’s not happy in the basement even though we visit him a couple times a day. He cries at the top of the stairs. It’s also not fair to the other cat to be locked in the basement, but it would be worse to keep them without companionship.

I had a hard time cornering him this morning; I think he knew something was up. The surrendering process at the Animal Rescue League in Dedham was painless and we visited the cages where he’d be kept. There were a couple of 13 year-old cats there, so he wouldn’t be the oldest, and his cage was in the top center, so he had a good spot. We donated $100 and his carrier to the shelter, mostly to assuage our own guilt.

I hope someone takes him home, hopefully adults in an upper-floor apartment where he won’t be able to see other cats close by.

It was a good run, Pixel. We hope you find a home where you can be happy again.