The last time I bought a mattress for myself was about 11 years ago. I bought a fairly new full-sized one off a coworker. Four moves and a decade later, we’ve decided it’s time to replace it with an adult (and sometimes an extra toddler)-sized bed. 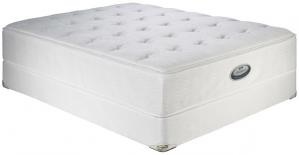 When we started looking, I was shocked at the prices. $3000 for a mattress? What the heck are these things made of? Knowing very little, we went shopping for a mattress and other things on a Saturday morning. The first place, we stopped, Sleepy’s, seemed nice enough. We laid on a few and honed in on the one that we both felt most comfortable in. Meanwhile, Audrey discovered the fun of letting herself fall backwards onto mattresses and did it all over the store. She was giggling and the whole store couldn’t help but look and smile at her. Unfortunately, we soon stopped smiling.

When we found something we liked, the seemingly helpful salesman started to get more aggressive. He asked how much we were looking at paying and I made up a number on the spot, something way below the listed price on the bed. The said he would “talk with his manager” and see if he could get us that price. Then he started asking us if we could commit and have it delivered tomorrow. Anne had walked outside to give Audrey a break by that point, so I said I had to go out and talk with her about it. We talked about it for a bit, then decided we didn’t like the high-pressure sales pitch, so we got ready to leave.

I had the car started up when the salesman came out and approached the car window. He then said that he had “talked to his manager” and he could give us the price we wanted AND a free “platinum package”. I said we would talk about it and let him know. We again decided this was sketchy, but to make good on my promise, I went in and gave him my phone number and left.

Later that day we went to Jordan’s Furniture, generally known to be a reputable place with reasonable places. The salespeople there were nice and NOT high-pressure. Prices were generally lower, but strangely, we couldn’t find the mattress we found at Sleepy’s. They had Sertas, but not the one we liked.

Being indecisive, we left with a couple new names of ones we liked. Later, we went to Mattress Discounters. The woman there was not pushy and told us about the BBB complaints that Sleepy’s (a 700-store chain) had gotten. We decided to think some more and head home.

At home, I did some research online and I found something strange – I couldn’t find much of anything on the mattresses we saw that we liked. I found some mattresses, many of the same brand, but not the same models.

I later came to find out that this was completely intentional. The mattress industry is one big scam. There is no way to make an objective decision on a mattress using actual facts.

Here’s a few things that the mattress industry does to get you:

1. They mark up their prices 100% to 200%!! No wonder the first guy was able to get his “manager” to give me such a steep discount. They were probably still going to make hundreds of dollars of profits on it.

2. They give the same mattresses different names in different stores or they set up exclusivity agreements by mattress line in certain stores. This makes it impossible to comparison shop because…

3. They make it really had to get actual facts about the mattresses. Stuff like coil counts, materials, overall construction are shrouded in secrecy. But that doesn’t really matter because…

4. There’s no objective measure of mattress quality. Consumer Reports won’t rate them because they can’t get the data and there’s no testing that actually says higher coil counts are better or the number of wires in the coils makes a difference in any way. You’re left to deciding how much you believe the marketing. Is a pillow top made of alpaca hair any better than one made of cotton? Your guess is as good as mine.

5. There’s very little online reviews of mattresses, probably because the model names are so fractured. The ones I did find looked more like content-free sites designed to attract referral credits.

With some more research, I found out that it was somewhat possible to compare mattresses models from different places. It turns out that they really only make one hardness variation in each line. So you can assume that a Plush Firm mattress in the “Classic” line, is the same as another Plush Firm in the Classic line, even if they have different names.

US-mattress.com was very helpful in figuring this out. We were able to understand which mattresses we saw and how they related to each other. For example, the mattress we liked at Jordan’s was a product line better than the one we saw at Mattress Discounters, even though they came out to the same price! Clearly Jordan’s had the better deal, but US-Mattress had an even better deal.

So I did something I never thought I could do, buy a mattress over the internet. I’m pretty sure it’s the same one we saw in the store and the free delivery and frame were a good deal. I’m sure that even if I’m getting it at half the price I saw it listed at elsewhere, they’re still making a decent profit on it.

Our mattress should arrive in a few weeks. Hopefully we’ll just find it comfortable enough to have to avoid going through buying a mattress again for at least another 11 years.

UPDATE: The mattress arrived quickly and in good condition. We’ve been sleeping on it for several nights and while it feels comfy, I’ve had some upper back soreness which seems to be related to the new mattress. I’m going to keep trying it for a few more weeks and see if my body adjusts as the US-mattress.com website suggests. Hopefully it will go away. Otherwise, we’ll have to find another one and do a $100 exchange I guess.