Soon after my move back to the East coast, I realized there was going to be one big change in my daily life – I had a commute to work. For the last 9 years, I lived less than 2 miles from work and my one-way commute averaged about 7 minutes. Traffic wasn’t a factor then, but it is was now. For the first month, I commuted from New Hampshire and it was always at least a hour to the office in Cambridge. 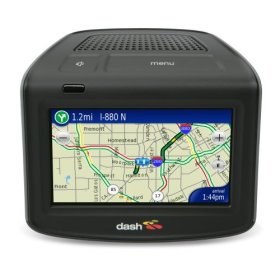 While I have a Garmin GPS, it’s more for hiking than for driving, so I started looking at GPS receivers more appropriate for the car. The one that immediately appealed to me was the Dash Express, a GPS infused with
wireless connectivity to the Internet. This opens up a whole lot of interesting things you could do with it. For one, you can get real-time traffic. You can send addresses to the GPS from your computer without connecting the GPS up with a cable. It appealed enough to my geek lust that I had to get one. I ordered it from Amazon and it arrived in a few days.

(Sidenote: It was $310 when I bought it, but the price dropped twice on Amazon to $289. I emailed Amazon and they refunded me the difference. I love Amazon.)

I set it up, turned it on and connected it to the Wifi network. It managed to get a GPS signal inside, which was a good sign. It soon called home and realized there were updates to the software available, so it downloaded them and installed them. Strangely, it did this 3 times, each requiring a lengthy reboot process.

The internet connectivity requires a monthly subscription and there’s mention of a free trial, but I wasn’t sure how it worked. While I had to register the device, I didn’t have to provide a credit card or anything. It turns out that the 3 month free trial starts automatically when you register it. That’s nice, it just wasn’t obvious that I had the internet service even though it appeared to be working.

The real-time traffic is pretty cool. Solid lines show recent road speeds from other Dash units, while dashed lines are based on data from traditional traffic services and historical data. Sometimes I saw solid lines and didn’t believe that someone else with a Dash had really just been through the area, but I guess it was true.

When you want to route to a place, it looks at the distance and traffic and provides you at least 2 different routes if there are multiple reasonable ways to get there. In some cases it presented routes which were not reasonable, but they’re pretty obvious and hopefully they will fix these. The downside of this is that it takes a while from when you request a route to when you an actually select one and go. It’s a 3-step process instead of the 1-step process on most other GPS units that don’t give you such choices.

The mini-applications you can install are pretty cool and are really what makes this GPS a lot different from others. One application allows you to browse all the local radio stations and see what’s currently playing on them. Others are just shortcuts to local searches.

The unit is rather big compared to other GPS units these days. That doesn’t really matter when it’s mounted on the dash, but it is annoying when you have to carry it around. GPSes are very common targets of thieves, and I don’t want to leave a $300 device in plain sight, so I take it in with me when I get to work. Unfortunately, its size means you can’t just slip it into your pocket or purse. It does come with a little carrying case which I found unnecessarily tight and difficult to shove the Dash into.

The Send2Car feature is really nice. If you’re going somewhere new, you just use the form on Dash website to send it to your Dash GPS and it picks it up next time you turn it on, assuming you can connect to a Wifi network or GPRS signal. It’s somewhat unfortunate that they chose GPRS as their wireless technology since at least where I live, CDMA (Verizon and Sprint) have much better coverage. That said, it generally hasn’t been a problem for me.

While I appreciate the device overall, there are definitely some other problems I haven’t already mentioned:

There’s a few more things I’d really like to see in future devices:

What’s really interesting about the Dash is that it seems to be the first of new generation of general computing devices for the car. It’s not just a GPS, it’s a weather information service, a web browser and “who knows what else” in the future. The only problem with this is that it’s not really part of the car. It doesn’t integrate with the radio, the air conditioning or the car’s internal computer. It’s yet another device to maintain and worse, something I have to carry around for fear of it getting stolen.

Cars are getting their own built-in systems for GPS these days, but they tend to be sub-par. What I really want is a platform for cars where you can customize the software to your needs – dare I say – Windows for your car. It should provide the hardware interfaces into the car (with safety controls of course) and storage and internet access. Let me install whatever I want for the rest of the software. I want to have something that I know and has all my data in any car I drive, not whatever is (or is not) built-in to the car I happen to be using.

The Dash Express is a cool device and I have high hopes that will get ever better over time as more people get them, contribute to the traffic data, and the Dash software is updated to fix many of the flaws that exist today. Please buy one, especially if you live in Boston and do a lot of driving! 🙂