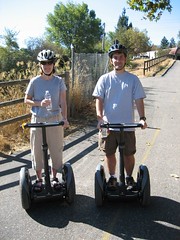 Yesterday was the day we had signed up for a Segway tour of the Los Gatos creek trail. South Bay Segway is a tiny little operation in the back section of an industrial building. We almost missed it. As we drove up there were only two Segways parked in the doorway, indicating that we were the only two people on today’s tour. Anne was thrilled. Unfortunately all the tour models were all the older Segways. All their new i2 models were all at the Tech Museum in San Jose where they just started doing tours as well.

After meeting the guides and paying, we watched an amusing instructional video of what to do and what NOT to do. I
recognized half the video as being shot in the millyards of Manchester, NH, home of the Segway and my hometown.

We signed our waivers, got on our Segways and practiced a bit. It took about 5 minutes on the devices before we felt pretty comfortable on them. Remembering which way to twist the handlebar grip to turn was the hardest part.

With our guide, we cruised down the sidewalk a few blocks before we entered the Los Gatos Creek trail. We went for a while with the slowest key first (max 6 mph), then got to switch to the intermediate key (8 mph). To keep you from going too fast, the Segway pulls back on you. They advise you in the video to not lean over the front of the handlebars when it does this. In any case, it’s annoying when you want to go faster than you’re allowed.

Our tour lasted about two and a half hours and we went about 10 miles. We took a few breaks including one for our guide to do a demo for someone who was interested in a future tour.

At one of our breaks our guide told us a few things about the business. While dealerships make $1000 per Segway sold, most can’t survive on just selling them. Tours make more money and some dealerships only do tours. The famous picture of George W. Bush falling off one was because no one told him how to turn it on. When it’s off, it doesn’t self-balance and there’s no way you can balance on it yourself.

We really enjoyed the tour. It was a different way to see the trail we’ve been on many times before and was neat to ride such a futuristic device. Neither of us even came close to falling off.

For sure, an easy way to attract a lot of attention to yourself is to ride around town on a Segway. Most people looked curiously and smiled. Kids were amazed. A few snarky people made comments about how this was not a way to burn calories.

In general the guys on bikes were the rudest. They complained about motorized vehicles even though all the bikes were going twice as fast as we were and seemed much more like a hazard than us. You can stop a Segway a lot easier than a bike. I guess some people don’t like progress. South Bay Segway actually had to get permission from the town to use the trail. A meeting was held and no one complained. One more friendly guy on a recumbent bike asked if Woz was with us. 🙂

Because we weren’t able to ride the a new i2 model for the tour, we went over to the Tech Museum today and give one a spin. The big difference is that you pull the handlebar from side to side to turn rather than twisting the handlebar grip. While it’s more intuitive and follows more naturally with the lean of your body, it’s a bit dizzying. The wireless infokey was cool though and the alarm is enough of a upgrade to convince me that the i2 is the only model worth getting.