A few weeks ago, I ran across a cool product – a supermagnet. I joked on my blog that I wanted one for Christmas. Let that be a lesson to me: be careful what you ask for, you might just get it.

The day before I left for Christmas break, my team approached my desk (led by Glen) and declared that they had bought me a Christmas gift. I was pretty sure they were kidding when they told me they got me a supermagnet. They weren’t kidding.

It hadn’t arrived yet though so I would have to wait until I got back to play with it. Given the warnings in the description, I was worried about it damaging things, erasing my hard drive and breaking my fingers. I actually dreamt last night that all these things happened.

When I arrived at work this morning, it was there. Glen placed it on a chair in the row between our cubes. It was in a small box, but you could still feel the power of the magnet inside when you put the box next to something metal. Scary.

Since it was my first day back, the morning was busy, but I found some time this afternoon to open it up. I opened up a the small box with the magnetic sticker warnings on the outside. It was mostly full of styrofoam. In the middle was a small object wrapped in foam wrap. I took it out and stuck it to a metal pole. It held securely. Inside was a box with another magnetic sticker on it. Inside there was a block of wood. Underneath was the magnet on top of another block of wood. It was hockey-puck sized and shiny. It was time for the fun to begin.

First I stuck it to some scissors. I held the scissor handles and it stuck to the bottom of the blades. I threw some random metal objects to it and it held. I affixed it to the metal frame of my cube and it connected with a loud clang, pinching my fingers. Ow. I stuck a large steel i-beam to it. It was hard to remove.

Soon word got out that it the supermagnet was here and a bunch of people showed up to play with it. We looked around for large metal objects to see if it would hold them. We attached a bunch of small things, then a filing cabinet drawer, then an entire chair! Everyone was impressed. 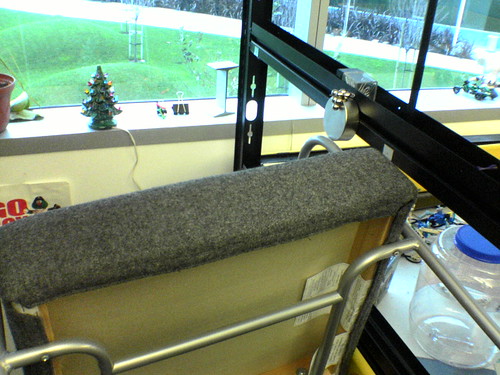 I’m going to have to keep this a few feet away from any hard drives, but it seems to be mostly safe. Having two of these would definitely be dangerous though.

Thanks, guys! This is the coolest useless toy I got this year!